India’s own Jurassic Park. For those that loved the movie for the sheer art that it was, portraying in splendor, a world forever lost, this park would transport you to millions of years ago when hundreds of birds flew around, often swooping to the land below to catch it’s prey, large mammals walking without boundaries, jackals sprinting across the road, faster than your camera can go click, and pythons crawling lazily out of the water to bask in the sun. This is Keoladeo National Park. 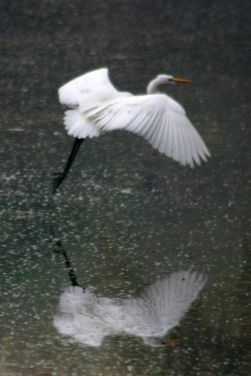 The park was originally used as hunting grounds for the royals and persons of influence, but now it is not only a national park (since 1982) but also a world heritage site. During the winter months the park serves as the stop-over for many local and migratory birds, with the rare Siberian Crane making its appearance occasionaly, though in the last few years, their numbers have dwindled. In all over 300 species of birds have been spotted. An area less than 30 sq.km, a mere 50 km from Agra and less than 5 hours from Delhi, it is easily approachable through the Delhi – Agra highway. Look for the turn to Bharatpur, the town where the park is situated, after crossing Mathura. This last stretch of road for 30 km can be treacherous, with the term road said with all sarcasm. Once you arrive at Bharatpur, numerous lodges, hotels and guest houses can be found, with prices ranging from as low as Rs. 100 ($2) per night to a little more than Rs. 3500 ($75) for a heritage hotel within the park.

We stayed at Hotel Saras, the only Rajasthan Tourism Development Corporation (RTDC) hotel for Rs. 900 ($20) per night. Plan the trip such that you arrive late into Bharatpur, get a good night’s sleep, and head out into the park in the wee hours of the morning. It will be dark at 6 am, but by 6:30, the sun would have risen. So rise early. The entry fee is Rs. 25 for locals and Rs. 200 for foreigners with extra being charged for a moving image camera. The park can be seen by walk, bicycle, boat (restricted area) and cycle-rickshaw.

The bicycle can be rented for Rs. 25 for the day, though it is better to hire a rickshaw (Rs. 50 per hour) with the rickshaw-puller doubling as the guide. You can also hire an official guide for Rs. 70 per hour. Having a guide is extremely useful, if you are looking for specific birds or animals.

Once inside, be well equipped. A binoculars is a must if you are just bird watching, and a camera, zoom lens, and tripod a must if your are a wildlife photographer. Carry water and sandwiches. During the summer, it can get hot, and even in January, as the sun rose above, we had to remove our woolens. The only canteen is the park is near the end and they only serve ‘bread-pakoras’, cool drinks and coffee and tea. Use the rickshaw to store your stuff.

Around afternoon it might be a good idea to return to the boating area and take a relaxing ride through the park. The cost is Rs. 75 per boat and Rs. 25 per head. If your are lucky you might see the mammals as they cross across the river or you might even spot a heron catching a fish.

Find out the right season, usually December and early January, and enter into this water wonderland. This is definitely a worth-while trip to make from Delhi.