Christopher Columbus landed in Jamaica on May 4th, 1494. 485 years later, to the day, I was born. 10 years later we moved to Jamaica and I lived there till 1993. 17 years later, we visit Jamaica again, this time as a tourist. As we approached the island, we could see the various blue hues of the Caribbean sea lapping onto the shores of Jamaica. The mountains on the island glistened in the sunlight. We landed in Montego Bay after a 3.5 hour direct flight from O’hare Chicago. We checked into the El Greco Resort, a condo property located right above Hip Strip and Doctor’s Cave beach. The hotel isn’t fancy, but the location is unbeatable. After a short break, we took the elevator down to Hip Strip and onto the beach. 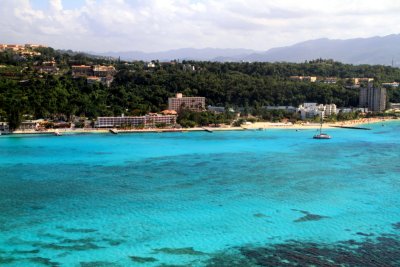 As we walked on the beach for the first time, we were amazed at how shallow and blue the waters were. It was also crystal clear, and there were schools of fish swimming close to the shore. We didn’t have to go far for a little snorkeling. An hour later, we decided to check out Hip Strip, the main shopping and restaurant location in Mobay. We ate dinner at Bobsled Cafe, modeled with everything from the Cool Runnings movie. The mango dip and jerk flavored dip to go with the sea salt coated potato wedges were delicious. We finished the night with the first round of souvenir shopping from one of numerous Indian owned shops. It is no exaggeration that 90% of the stores are all Indian owned.

Day 2 began with a Jamaican breakfast on our porch overlooking the Caribbean sea; yam and dumpling with a cabbage salad.

We also had our welcome drink, a fruit punch with more rum than fruit. Perfect. Our taxi had arrived from Negril, and we started on a 1.5 hour drive to Negril. We hugged the coast as we drove west but often had to navigate the slopes of the mountains that ended almost at the coast. Negril is the west most town in Jamaica, and our hotel, Catcha Falling Star resort was the west most resort on the island on the cliffs of Negril. As we drove into the property, we knew no place we had ever stayed in, would compare to the views from our one bedroom Aries suite. We were glad we skipped the all-inclusive hotels on the 7 mile beach for this cliff side resort. We also decided to spend the day on the cliffs, the waters surrounding it and in the pool that almost flowed over the cliff. Looking west, we could only see the endless expanse of the sea.

We had heard a lot about the famous Negril sunsets, one of the 1000 things one must do, but unlike many of the hyped things that fail to deliver this was one that the hype doesn’t do justice to. We sat at the edge of the cliff, saw the waters rhythmically bounce against the rocks, and watched the sun at first slowly and then quickly plummet into the sea. It was unbelievable, and a view we can never forget.

Dinner was at Ivan’s Bar and Kitchen, Negril’s best restaurant

which also happened to be within our resort. Rasta Pasta was a flavorful combination of fresh vegetables and pasta cooked in coconut milk. The pumpkin rice was simple but just right. For desert, Banana Flambe with vanilla icecream. We slept well, though the rain raged outside.

Day 3 was another relaxed day. We headed out to the 7 mile beach, the longest stretch of powdery, white sand in the island. We spent hours swimming in the warm waters and spent even more sleeping under the umbrella. We also walked a few miles of the beach, fuelled by rum and some coconut water. We did turn down the numerous offers for ganja. Really.

We returned to Catcha Falling Star after stopping for a quick lunch at Ras Rody, a roadside Rastafarian selling purely vegetarian meals. Rice and Peas and Callaloo, the main ingredient of which is a leaf vegetable, traditionally either amaranth or taro Xanthosoma and cooked with garlic and onions and turned into a stew like consistency. The food was overpriced but considering his roadside shop has become the 5th highest rated place to eat in Negril, he probably deserves it. The rest of the afternoon was hot, and was spent in the pool and on beds laid out on the cliffs.

There was something calming and yet simultaneously exhilarating about being so close to the sea. As the sun set for a second day in a row, we couldn’t help but wonder if we could spend all our lives on these beautiful shores. Dinner was special, with a Jamaican wedding party eating at Ivan’s and all the place settings were laid out elegantly. The sky was clear, and the stars and planets stared to shine and we spent an hour counting the stars and making wishes on the 3 shooting stars we saw. There must have been something in the air or something in our drink. 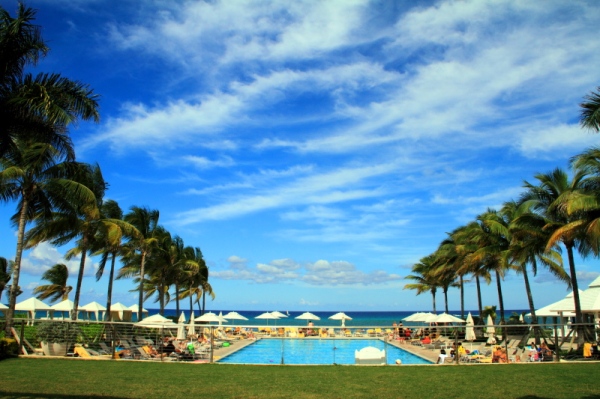 10 km from the Mobay airport, on a strip of sandy land, lie all the most popular all-inclusives. Couples, Sandals and Beaches. An all-inclusive is perfect both for couples that want to do nothing and for families that want to do everything. Food and alcohol is included and non-motorized water sports are free for all. There are numerous events for the kids during the day and during the night, the resort turns into party central for the adults. The all-inclusive concept originated in Jamaica and now there are resorts all across the Caribbean. We spent the whole day at the beach, leading to a lot of tan, bad outside but good inside. We ended the day with a Jamaican Gala event; limbo dancers, fire eaters, steel drums and a lot of dancing.

Day 5 was our day of journey. We started early and set out towards Ocho Rios. On the way, we stopped at Columbus Park, paid homage to the place where Columbus landed and then headed to the Green Grotto caves at Runaway Bay. The caves were used by the Spanish as an escape route as the British were chasing them out. The caves are home to nine species of bats and also the Jamaican Yellow Snake.

The filming of the 1973 James Bond film Live and Let Die, used the caves for villain Doctor Kananga’s underground base. It is most memorable for being the location where Bond kills Kananga by forcing him to swallow a bullet of compressed air, causing him to float up to the ceiling like a balloon and explode.

40 feet underground the caves are also home to a river and the waters act as a wonderful spot for reflections, the literal and the figurative kind. Just don’t let your guide turn off the lights.

We continued on to Dunn’s River Falls in Ocho Rios, and this is one attraction, no tourist should miss.

Mountain, river, waterfall and the sea come together in this un-real natural phenomenon. Imagine a paradise with a meandering river, slowly picking up speed, and then tumbling down a mountain side in a rumbling waterfall and then dropping right into the sea. You don’t have to close your eyes and imagine, rather go to Ocho, open your eyes and soak it all in. You can even climb the falls, though do it without the guide, less safer but way more interesting. We ate at one of the many Indian owned Jamaican restaurants and then headed to Mystic Mountain to get a different view of Ocho Rios, from atop the mountain.

A $45 ski lift flies you over tree tops and to the top of the mountain. Another $65 can get you down much faster in a zip line but we saved that for another day.

We continued on our drive, through Fern Gully, a 4 mile stretch of road that carves its way through the mountains with ferns on either side. We reached Kingston around 7:30 at night and we ended the day chatting till midnight with great friends.

Day 6 was in Kingston. We spent the day visiting Sts. Peter and Paul Prep. school and Campion College, my old schools and driving past the home that I stayed in. We bought Sun Island tee shirts, ate at China Express at the Marketplace and then finished it with icecream at Devon House, a national historic place. We drove to the University of West Indies campus at Mona and then ended the day on the hills overlooking Kingston from a sunset lookout point. For dinner we headed to a wonderful Italian restaurant, Cafe Da Vinci, with school friends. The next day we were back on a flight to Chicago.

Jamaica, is a small island, 4000 square miles (smaller than the state of Connecticut) and less than 3 million people. No matter how much I joke about it being my country, there is a small part of me that will always, sincerely be Jamaican; and, once you go there, you might be too.