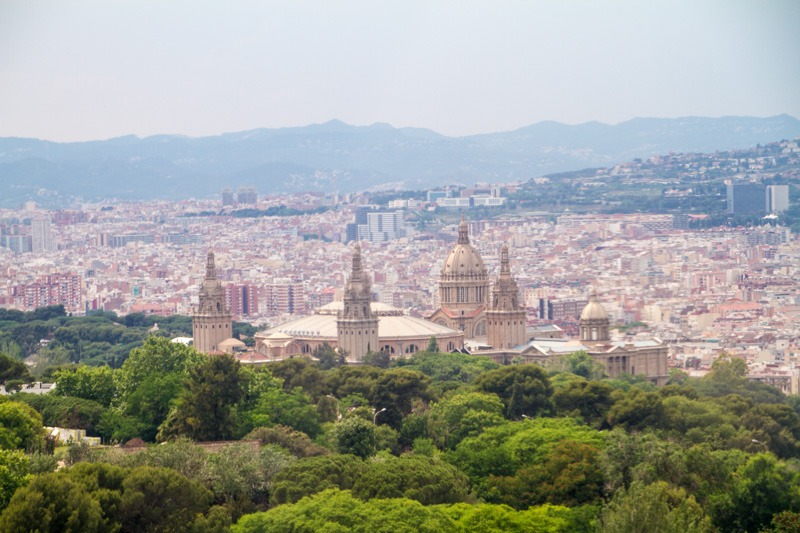 Day 1: Ramble on! – We landed in Barcelona around mid-morning and took a taxi to our hotel, The Gran Torre Catalunya, near Barcelona Sants, the main train station. Though not walking distance from the key sights, the hotel was very accessible as there is a bus stop for the Hop on, Hop off bus tour nearby. We ate lunch at the hotel, and headed out to La Rambla.

La Rambla or Las Ramblas, is a street in central Barcelona, popular with tourists and locals alike. A tree-lined pedestrian mall, it stretches for 1.2 kilometres (0.75 mi) connecting Plaça de Catalunya in the centre with the Christopher Columbus Monument at Port Vell. While opinions on the street vary from, “don’t visit, too touristy” to “must-see”, we tend to agree with the latter. It is touristy, but instead of being turned off by the merchants selling cheap, illegal and fake goods, stand a while and see how they react to the constant vigil of the Barcelona police. Grab icecream from the many vendors, pick a cafe and people watch. The Rambla is the location for several of Barcelona’s cultural establishments like the Gran Teatre del Liceu, Barcelona’s renowned opera house, opened in 1847 and the Teatre Principal, the oldest theatre in Barcelona, founded in 1568.

Also along the way is the Mercat de Sant Josep de la Boqueria, a large public market in the Ciutat Vella district and one of the city’s foremost tourist landmarks. The crowds, the food, the atmosphere, this is a great place to see why Barcelona is so energetic.

La Rambla ends at Port Vell, a waterfront harbor and part of the Port of Barcelona. It was built as part of an urban renewal program prior to the 1992 Barcelona Olympics. The Columbus Monument stands at the entrance to the port, and a pedestrian walkway, Rambla de Mar, connects La Rambla to Port Vell.

The port is now a focal point of the city and tourist attraction, with Europe’s largest aquarium containing 8000 Fish and 11 sharks. Cities on a coast always have an edge, and that edge lies in the contrasting beauty of land and water and Barcelona’s edge was as sharp as can be.

To the east of La Rambla, is Barri Gotic, or the gothic quarter. The streets are narrow, neo-classical buildings on either side, bridges that span buildings and every street cornered by plazas. The Basilica of Our Lady of Mercy is in the area as well as the Church of Santa Maria del Pi and the Church of Sant Miquel. It is widely believed that it was on the steps fanning out from the corner of the Plaça del Rei square in the Gothic quarter, that King Ferdinand and Queen Isabella greeted Columbus when he arrived home from his first voyage to the New World.

Around the same area, is the Cathedral of the Holy Cross and Saint Eulalia, or the Barcelona Cathedral. The present Gothic cathedral was begun on the foundations of the previous churches on 1 May 1298. In the late 19th century, Miguel Girona i Agrafel offered to complete the neo-Gothic facade and towers as inspired by the original 15th-century design and drawn by the architect Josep O. Mestres. This work was completed in 1913 by Girona’s children.

The area around the Cathedral becomes an important gathering point for people and as the day wears on, musicians, artists, and thus tourists assemble in front. It is great to end the day on the steps of this beautiful cathedral. We had dinner at a restaurant on La Rambla and returned to the hotel to rest.

Day 2: Gaudi, but not a Gaudy day – Barcelona and Gaudi go together. A Spanish Catalan architect from Reus and the best known practitioner of Catalan Modernism, Antoni Gaudí’s works reflect an individualized and distinctive style, influenced by his passions in life: architecture, nature, and religion. Gaudí considered every detail of his creations and integrated into his architecture such crafts as ceramics, stained glass, wrought ironwork forging and carpentry. He also introduced new techniques in the treatment of materials, such as trencadís which used waste ceramic pieces.

His masterpiece, the still-uncompleted Sagrada Família, is the most-visited monument in Spain and seven of his works were declared World Heritage Sites by UNESCO. We started the day at Casa Batllo, where it was almost impossible to find straight lines. The walls, roofs, doors, windows all followed the flowing shapes of water and were patterned over the designs found in nature, especially at sea. The rooftop is one of the most famous in Spain with the sculptures towering into the blue sky and making Barcelona instantly recognizable.

A few blocks from Casa Batllo is Casa Mila, also known as La Pedrera, meaning the ‘The Quarry’, a modernist building built between the years 1906 and 1910. Architecturally it is considered an innovative work by having a structure of columns and floors free of load bearing walls.

Our next stop was Gaudi’s magnum opus, the Basílica i Temple Expiatori de la Sagrada Família, and although incomplete, the church is a UNESCO World Heritage Site, and in November 2010 Pope Benedict XVI consecrated and proclaimed it a minor basilica. This was Gaudi’s dream, though when he died in 1926, less that a quarter of the church was complete.

Work continues today, funded entirely by private donations, with a scheduled completion date in 2026. Entering the church, feels like entering a magical, cement forest with colorful stained glass lighting the buttresses in a rainbow of colors. The church’s orginal facade was the Nativity facade, showing the stories from the birth of Christ. A second facade, the Passion facade now exists ans is especially striking for its spare, gaunt, tormented characters, including emaciated figures of Christ being scourged at the pillar; and Christ on the Cross. These controversial designs are the work of Josep Maria Subirachs.

The Glory façade, on which construction began in 2002, will be the largest and most monumental of the three and will represent one’s ascension to God. It will also depict various scenes such as Hell, Purgatory, and will include elements such as the Seven Deadly Sins and the Seven Heavenly Virtues.

Our final Gaudi stop was Park Guell, a garden complex with architectural elements situated on the hill of El Carmel. It is part of the UNESCO World Heritage Site “Works of Antoni Gaudí”. The focal point of the park is the monumental zone, which includes, the main terrace, surrounded by a long bench in the form of a sea serpent, the guard house, and the Porter’s Lodge and numerous sculptures in mosaic tiles like the Salamander.

Gaudí incorporated many motifs of Catalan nationalism, and elements from religious mysticism and ancient poetry, into the Park. For a child and for anyone with a child in them, this is the most fun and colorful park.

Day 3: Barca! Barca! to Barca beach Like the Sagrada Familia’s three facades, Football is a passion, comes natively to the Spanish and is glorious. Football is a religion and in Barcelon, the temple is Camp Nou, home of Futbol Club Barcelona since 1957.

The Camp Nou seats 99,354, making it the largest stadium in Europe. The stadium, when games are not in progress, and when fans are not screaming, offers tours. We started with the museum, immersed in the rich history of Barcelona football, and then visited the grounds, the stadium seats, the players box, the press box, and the interview rooms and by the time we left, we left as not only a fan but a Barca recruit for life. There are lots of photo ops in the stadium and definitely worth it.

Stop 2, on our Hop on, hop off tour of Barcelona, was the Palau Nacional, currently being used as the National Art Museum of Catalonia, MNAC. The palace was constructed between the years 1926 and 1929 for the 1929 International Exhibition in Barcelona. The views of Barcelona from the building are vast, stretching the eye all the way to Tibidabo mountain. the museum is home to over 290,000 pieces of art and deserves a day to itself to see a fraction of that. In front of the palace, is the Montjuic Magic Fountain, which really comes alive at night.

We, next, took the cable car from Montjuic station to the Montjuic castle, an old military fortress, with roots dating back from 1640, currently serving as a Barcelona municipal facility, built on top of Montjuïc hill. The views of the Barcelona port and the Balearic Sea beckon behind the fort walls. We then continued our tour and switched lines to the beachfront area of Barcelona.

Barcelona beaches are not white sand, hidden cove, shades of blue wonders, but it is what makes this city such a livable place. Life happens on beaches, and everything else grows, spreading away from that lifeline. The areas near the coast, are getting modernized, with the financial district, the residential areas taking up most of the space. There is great art on the streets, with a fish sculpture by Frank Gehry dominating the landscape and the Happy Lobster sculpture bringing a cheer to every face.

We ended our Barcelona adventure, with freshly cooked paella on the beach, and some night shopping in the Placa de Catalunya. Barcelona, unlike Madrid, is both a historic city and a modern, livable city. Interwoven between the churches, and the Gothic architecture, and the maritime prowess, and Gaudi’s masterpieces is a city with daily life. This made it more than just a tourist destination, it made it almost feel like a place you would like to call home.